Raute's North American Marketing Specialist, June De La Paz, has written an article published in the Spring/Summer 2020 issue of the Engineered Wood Journal on how "Engineered Wood Innovations Lead Technological Revolutions". Read about how the plywood industry has transformed with societal demands. Equipment continues to implement new technologies for efficiency, sustainability, energy savings, waste reduction, and more. Read about how the Raute Patching Line P2 has evolved to address changes in the industry, the needs of the customer, and the supply of quality wood resources.

From 1905 to 1920 door panels were the primary market for softwood plywood.

Engineered wood products by definition are technological innovations, although generations have defined “technology” differently. Industry partners have continued to advance and enhance the standards of these products by working together and building on previous innovations.

The First Industrial Revolution, starting around 1760 and lasting more than 70 years, dramatically altered almost every aspect of human existence. Traditional agriculture and handicraft economies, popular in the pre-industrialized era, were ousted to make room for large-scale industry that was more productive and efficient. The industrial revolution birthed some of the world’s greatest inventions like the steam engine, sewing machine, incandescent light bulb, internal combustion engine and the modern assembly line.

The world’s population climbed exponentially along with the standard of living, increasing demand for goods and services. By the 1800s the population would surpass 1 billion and the impact of the industrialized world would accelerate production capacity in all aspects of human needs including food, medicine, clothing, and housing.

The first patent for plywood was issued in 1865 to John K.Mayo of New York.Patent No.51,735 was an invention that “consists in the formation of various structures used in civil engineering of a plurality of thin sheets of veneers of wood, cemented or otherwise firmly connected together, with the grain of the several scales or thicknesses crossed or diversified so that they will afford to each other mutual strength, support, and protection against checking and splitting, shrinking or swelling, expanding or contracting.” Note: Mayo may have had a vision, but history does not record that he ever capitalized on his patents.

Advancing to the next level

The end of the 19th century saw the dawn of the Second Industrial Revolution. Technological advancements in new sources of energy industries in electricity, petroleum and oil would pave the way for the invention of the automobile and airplane and the development of new products. Discoveries and advances in chemical synthesis, the telegraph and telephone, the incandescent lightbulb and the rotary veneer lathe would significantly transform production and business.

The introduction and advancement of plywood

The plywood industry was born in 1905 when the Portland Manufacturing Company, a small wooden box factory, laminated wood panels from a variety of Pacific Northwest softwoods. By 1907, production soared, and to keep up with demand, an automatic glue spreader and sectional hand press was installed. In those early years, doors were the main use for this new engineered wood product, but it was the automobile industry that would advance the industry by using plywood for running boards.

In 1925, Steger Marvin Earl recognized that “… wood is beautiful in color and grain but is frequently marred by surface defects, such as pitch pockets, knots and the like.” He was issued the first patent for a defect-removing and patch-cutting machine. Unfortunately, his invention would not experience any real commercial success.

In 1928, 4-foot-by-8-foot plywood sheets were introduced to the U.S. for general building purposes.

The following year, 17 plywood mills were operating in the Pacific Northwest, producing a record 358 million square feet (on 3/8-inch basis). 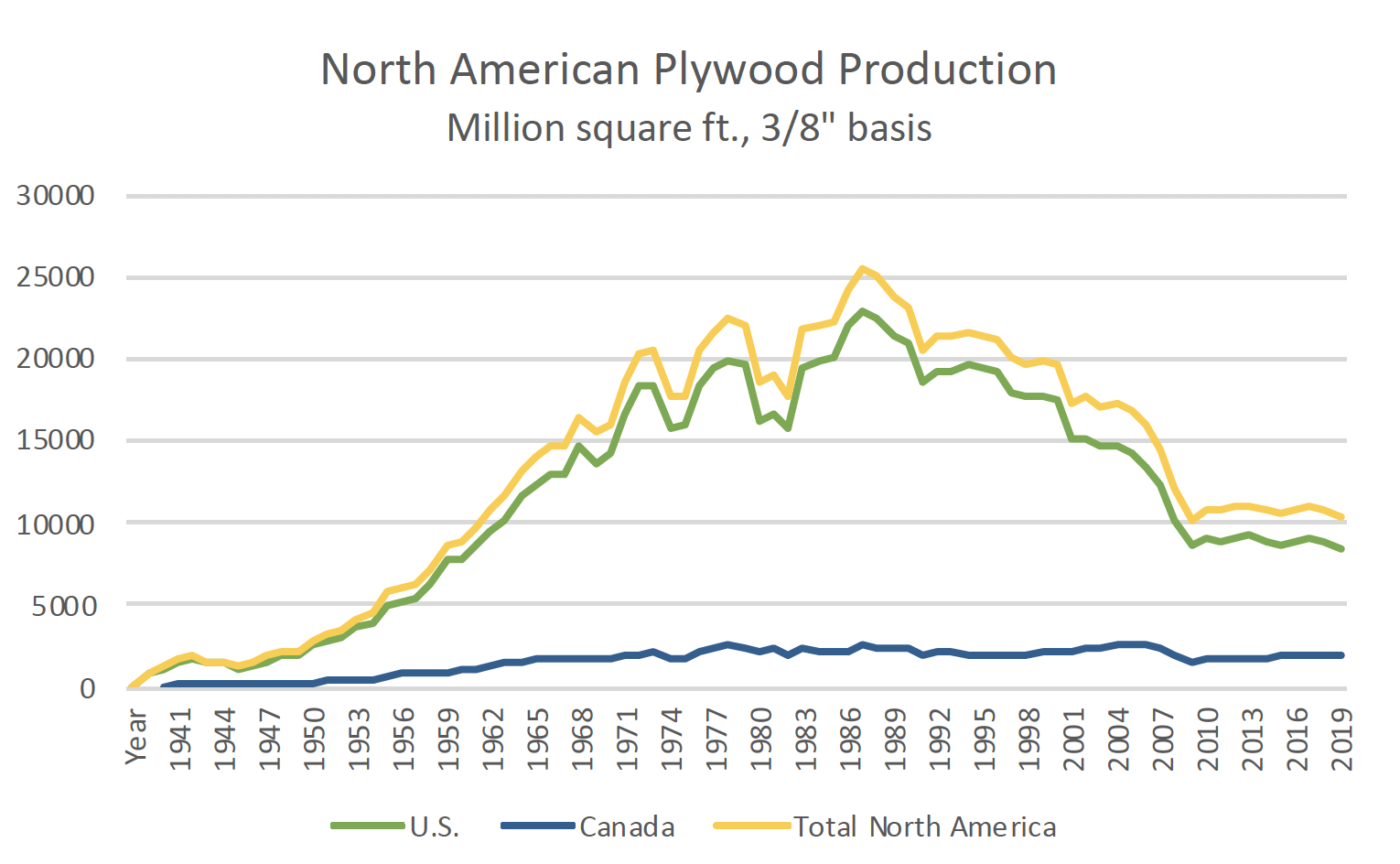 The Great Depression arrived in the U.S. Oct. 24, 1929, with the worst stock market crash in history, triggering the longest and most widespread economic depression of the 20th century. Motivated by an unprecedented 24.9% unemployment rate, substantially reduced household incomes and a shortage of low-cost housing, the demand for inexpensive and rapid-build factory-produced houses using plywood skyrocketed. 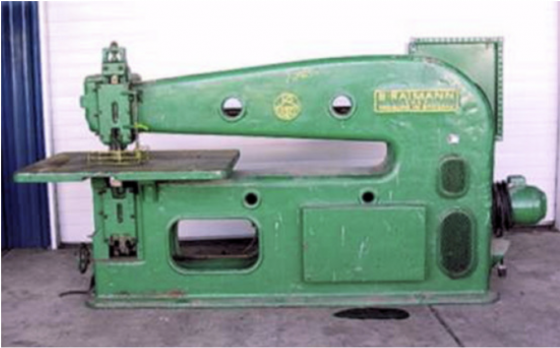 During World War II (1939 – 1945), plywood was declared an essential war material and used to make everything from barracks, boats, planes, huts, and temporary housing and shelters. In the decade following the end of the war, demand for plywood rose by over 280% and nearly doubled in the next five years as the economy boomed.

The defect and patch machine that Steger Marvin Earl invented in 1925 would come to fruition in 1941 when Per F. Skoog applied for his first veneer patching apparatus patent and later manufactured the Skoog Veneer Patcher under the Skoog Manufacturing Company, based in Olympia, Washington.

The first Grade and Quality Standards were introduced by the U.S. Commercial Standard and Douglas Fir Plywood Association (now known as the APA – The Engineered Wood Association or APA) in the same year.

By the 1950s, two manufacturers offered pneumatic or mechanical patching equipment with features like automatic die cleaning and patch blank magazine feed. These patching machines used single boat (oval with two points) patches about 4.5 inches by 2 inches cut from high quality veneer. The machine relied on an operator to manually check the sheet for defects, moving the sheet by hand into place while a foot switch initiated the die to punch out the defect and then insert a veneer patch. Well-made and built to last, these heavy-duty machines proliferated in the market for almost 50 years mostly unchanged and unchallenged.

The Digital Revolution, also known as the Third Industrial Revolution, marks the beginning of the information age with the introduction of the computer. Spanning the late 1950s through the late 1970s, the mass production and widespread use of computers, microprocessors, digital cellular phones and the internet once again transformed traditional production and business. 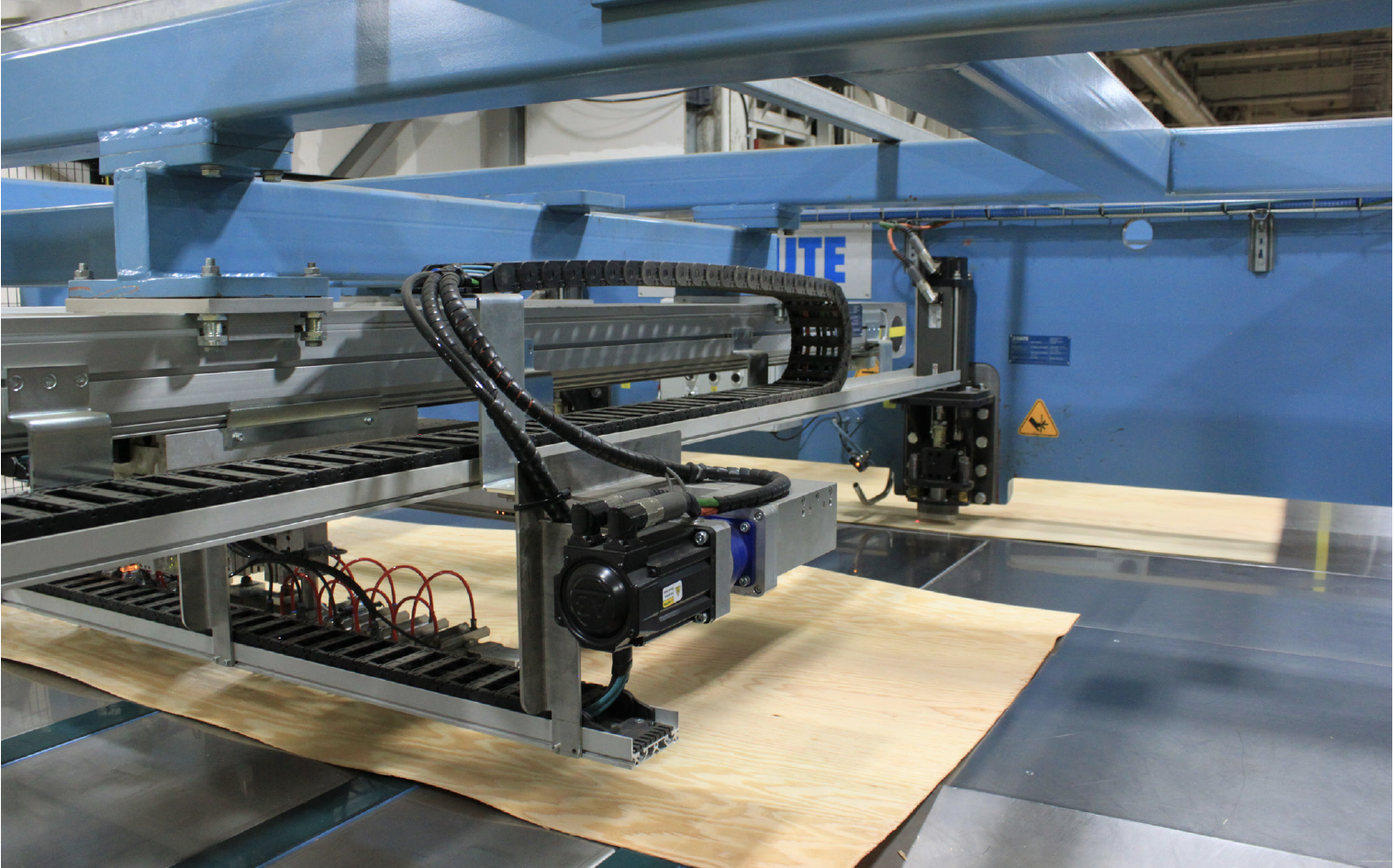 Plywood production advanced during the digital revolution through the development of the first automated patching line in the United States in 1998. Raute’s Patchman did not rely on operators to make patching decisions but relied on the technology of a camera grading system first introduced in 1997. This vision sensing technology accurately detected defects as small as 2mm x 2mm, scanning sheets at speeds up to 200 m per minute. A computerized system showed real time images of sheets as well as the ability to freeze and store images, magnify defects and customize grade rules. Scanned sheets were conveyed on vacuum belts for precision control, and programmable logic and motion controllers accurately patched defects. At the time, a single Patchman replaced three manual patchers and made about 1,900 patches per patching head every hour (about one patch every two seconds). Auto strip feeders reduced veneer prep, and the large magazine reduced frequent loading. The Patchman could accommodate three levels, allowing the replacement of nine manual patchers with a minimum increase in footprint.

Demonstrating how technology can move at lightning speeds, the next generation patching line unveiled in 2011, merging sophisticated cameras and intelligent automated advances into a high capacity system for fast and consistently accurate patching. The latest generation of patching lines minimizes waste and maximizes surface veneer value, without any manual veneer handling. A single level can patch about 3,200 per hour (less than 1 second a patch), over four times faster than manual patching.

Before the debut of these new patching lines, the best way to patch was tested extensively, including whether the shape and size of the patch made a difference in durability and strength. After rigorous and exhaustive testing in real veneer and plywood scenarios, Raute submitted butterfly-style patches to APA for evaluation in its laboratory. The results revealed that the patches can bear double the load of industry standard style of patches. As of December 2019, the butterfly-style patches were included in the updated Grade A veneer standard in Voluntary Product Standard PS 1-19, Structural Plywood, under the “compound boat” patches, which have multiple rounded ends. Before that, the U.S. Department of Commerce (USDOC) and National Institute of Standards and Technology (NIST) had not changed wood patch standards since 2010. (See pages 17-19 for recent Product Standard updates.)

“Standards are produced and updated through a consensus process, involving multiple agencies and industry partners, relying on data,” said Steve Zylkowski, APA’s director of quality services. “That’s how we have advanced the engineered wood industry together through the years.” 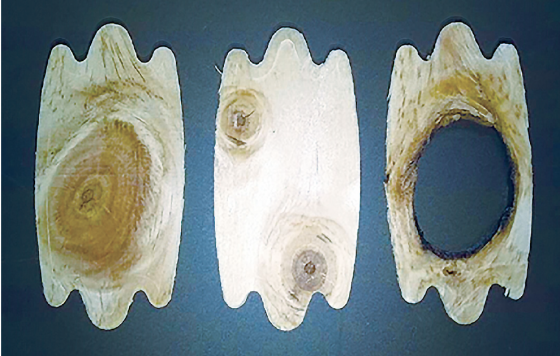 Looking ahead to the next revolution

It is projected that the fourth technological revolution is underway that will blur the lines between the physical, digital, and biological spheres. Technologies like artificial intelligence, autonomous vehicles and the internet along with voice-activated assistance, facial ID recognition and digital health-care sensors are technological changes altering how people, companies, organizations and even governments are operating, transforming societies like previous industrial revolutions.

With the Fourth Revolution upon us, the time before drastic societal changes is getting shorter and shorter. What will the Fourth Revolution mean to the plywood and engineered wood industry? What will future mills look like with artificial intelligence and autonomous equipment? Working together, the industry will continue to transform itself.