This remuneration report contains information about the remuneration of Raute Corporation’s Board of Directors (“Board”), President and CEO (“CEO”) and Deputy to the President and CEO (“Deputy CEO”) for the period January 1 – December 31 2020, and it is based on the recommendations of the Corporate Governance Code 2020 for listed companies issued by the Finnish Securities Market Association and on the requirements of the Finnish Companies Act and the Securities Markets Act. The Code is available on the Securities Market Association’s website www.cgfinland.fi.

The report describes the development of the average salary of the employees and the company’s performance over the past five years, as compared to the remuneration of the Board, the CEO and the Deputy CEO.

The remuneration report will be presented at Raute’s Annual General Meeting on March 31, 2021.

The aim of the short-term incentive plan (STI Plan) is to encourage implementation of the short-term business plan and to give rewards accordingly. The most important goals in the short term are profitability, the order book and indicators that ensure continuity. The indicators under the long-term incentive plan (LTI Plan) are the company’s EPS and TSR. The CEO’s short-term maximum incentive pay is 60% of his basic annual salary and the Deputy CEO’s is 40% of her basic annual salary. For the CEO, the long-term incentive bonus is equal to max. six months’ salary, and for the Deputy CEO, it is an amount equal to three months’ salary.

The remuneration of the Deputy CEO complies with the same principles.

Raute’s business is based on projects, and net sales vary annually. The company’s financial performance has varied over the past five years along with net sales. In 2020, the pandemic also posed challenges in recognizing revenues from projects and in the sales of technology services. 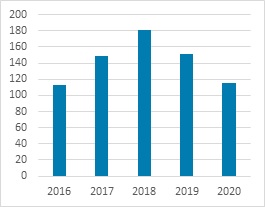 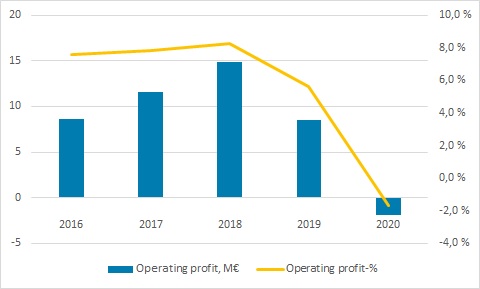 *Board of Directors' proposal to the AGM.

For the CEO’s remuneration, the incentives under the short-term incentive plans (STI Plan) are paid in spring of the year following the performance year, after the adoption of the financial statements. The long-term incentive plans (LTI Plan) consist of a three-year monitoring period and the incentives are paid in the spring of the fourth year after the end of the plan, once the financial statements for the final year of the monitoring period have been adopted. Due to what is stated above, the CEO’s total remuneration does not directly correlate with Raute’s financial result in the same or previous year.

DEVELOPMENT OF REMUNERATION OVER 5 YEARS (BONUSES PAID DURING THE YEAR)

* The pay development of Raute’s average employee is based on personnel expenses, excluding non-wage labor costs, divided by the average number of employees during the year. Raute is a global company whose remuneration varies considerably in the markets where it operates. For that reason, the calculation applies the remuneration data of Raute’s Finnish personnel. Finnish employees account for 65% of the total number of employees.
In 2016–2019, the Deputy CEO was Arja Hakala. 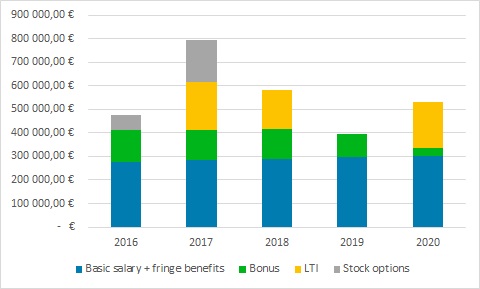 The remuneration paid during the financial year is presented in the graph.

REMUNERATION OF THE CEO

The evaluation of CEO Tapani Kiiski’s performance is based on the achievement of strategic and operational targets. In addition to basic salary, the CEO’s remuneration includes an annual performance-based bonus and the share-based long-term incentive plan (LTI).

Raute’s CEO was paid a salary and bonuses for 2020 totaling EUR 532,200. His fixed salary accounted for 57% of his full remuneration. The CEO does not have special pension arrangements.

The short-term performance-based bonus paid in 2020 was based on the key targets for 2019 related to the Group’s financial, strategic and operational targets set by the Board at the start of the 2019 financial year. The CEO’s short-term incentive plan outturn for 2019 was EUR 33,320, which corresponds to 23% of the maximum amount.

The Board set short-term incentive criteria for 2020 at the start of the 2020 financial year to support business development. Based on his achievements, the CEO’s performance-based bonus for 2020 was EUR 0.

The CEO’s fringe benefits (car and phone) are included in the basic salary component. The CEO does not have any other special benefits or pension arrangements.

The period of notice for the CEO’s resignation or termination of employment is six months. If the employment relationship ends for a reason attributed to Raute, the CEO is entitled to severance pay equaling 12 months’ full salary.

AUDITING OF THE REMUNERATION REPORT

Raute’s auditor for the 2020 financial period, PricewaterhouseCoopers Oy, has verified that the remuneration report contains the information required by legislation.

This page was updated on 01.01.1970
This website stores cookies on your computer. These cookies are used to collect information about how you interact with our website and allow us to remember you. We use this information in order to improve and customize your browsing experience and for analytics and metrics about our visitors both on this website and other media. To find out more about the cookies we use, see our Cookie Notice. Optionally you can select the level of allowed tracking. In any given consent, a single cookie will be used in your browser to remember your preference not to be tracked.